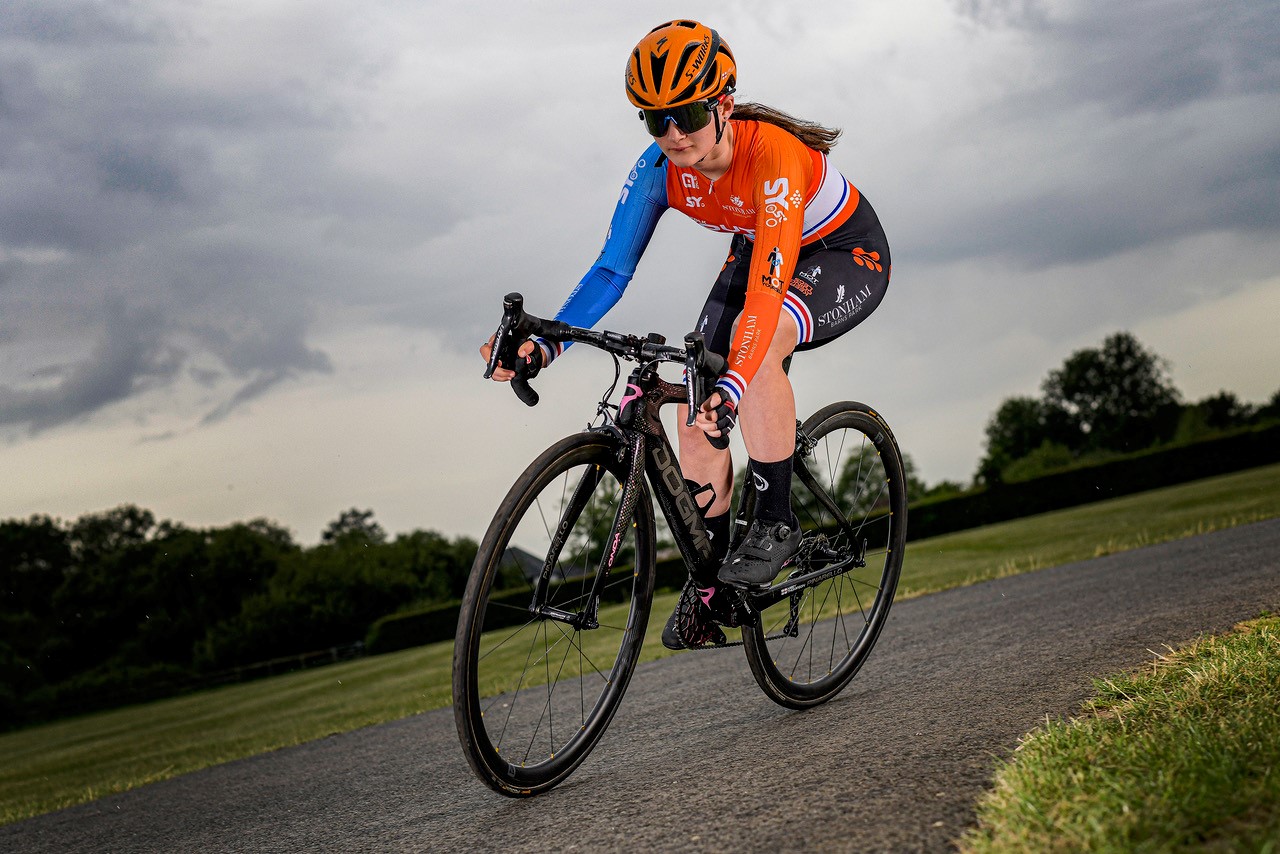 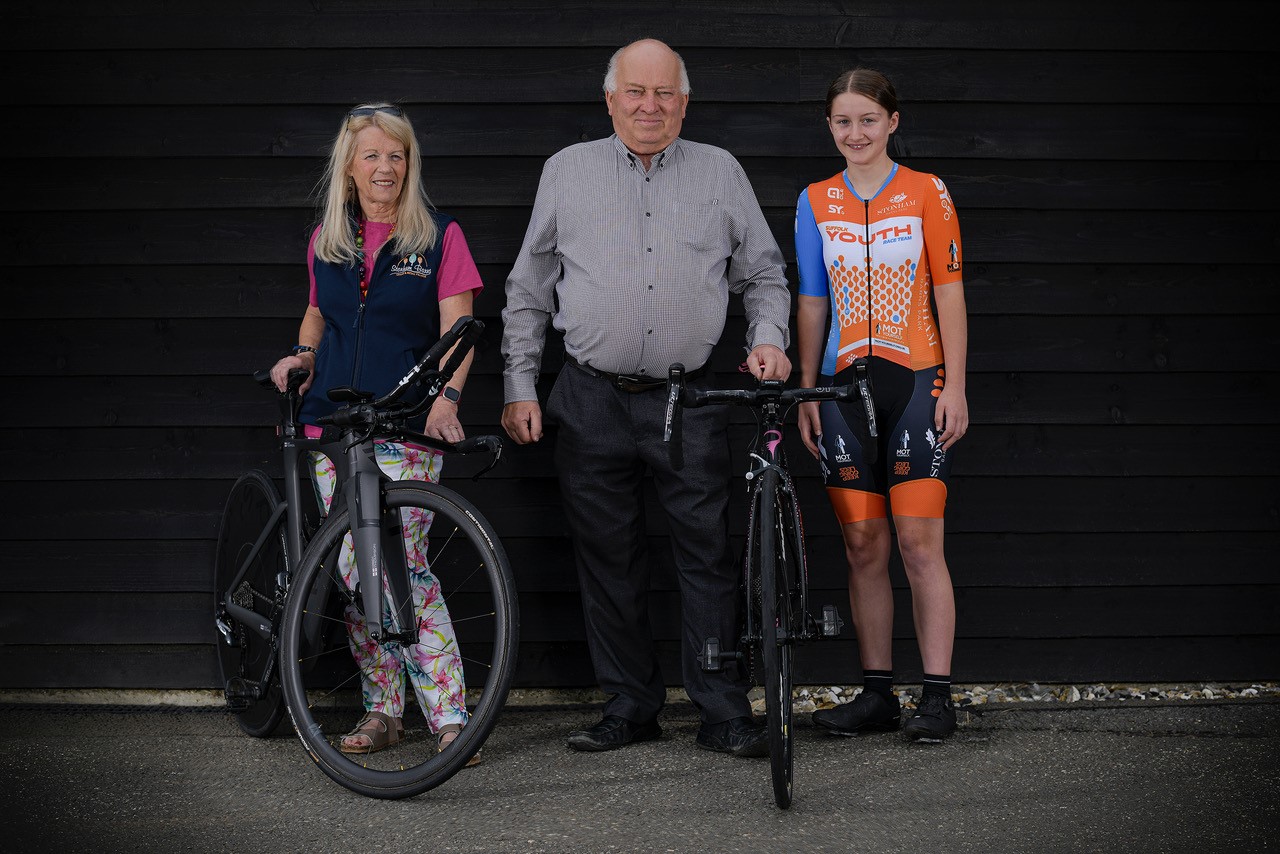 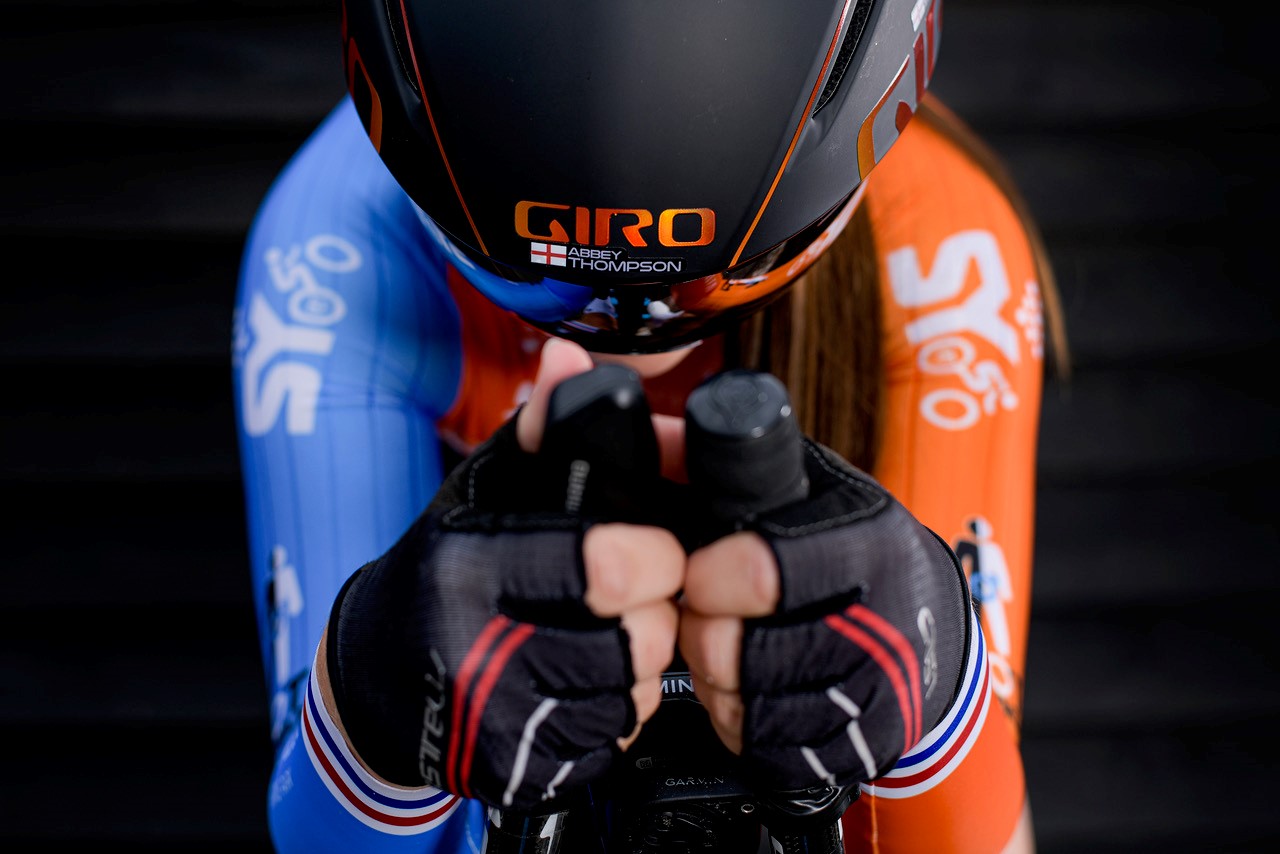 The Stonham Barns Park branded kit manufactured by Alé in fluro orange and vivid blue injects safe and bright colours into youth cycling.  The kit even includes a ‘Keep Going Legs’ motivational message on the cycle shorts, a much-needed boost for the young cyclists as they push the boundaries of youth cycling.

Abbey from Crowfield, near Stonham Aspal, competes in road racing, cyclocross and TT events both nationally and internationally.  At just 12 years old, she is a multiple National Time Trial Champion, TLI National Road Race Champion, National Youth Series winner, and 2021 Regional Road Race champion.  Internationally, Abbey has won the Youth Classic Paris Roubaix Road race in France, which she sees as one of her biggest achievements.

During 2021, Abbey has had some outstanding results.  She won a National Youth Series Championship Road race in London, multiple National Series Time Trial races, National Time Trial Championships and lapped the field of boys and girls in her age category in the East of England Road Race Championships in Colchester.  For the close of the 2021 Time Trial season Abbey is ranked Number 1 in the country for under 16s, at the age of 12.

Abbey’s performance peaked during early August for the National 25-mile Championship, where she was the 1st 12-year-old, 1st Juvenile (Under 16s) and 2nd Junior (under 18s) with a time of 1 hour 3 minutes and 23 seconds with an average speed of 23.66 mph.  Abbey said after the race, ‘I didn’t have anything left in me for the last half mile, I just tried to stay as aero as I could and watched my power and cadence carefully, ignoring my speed and just hung in.  The race preparation helped me to the end. I crossed the line feeling I couldn’t ride one more metre! Two weeks before, Abbey had broken the Junior (under 18s) 10-mile record for a fast course in Kent with an average speed of just under 25mph.

During 2022 she is hoping to compete in a number of major European races, as a first year Under 14-rider, which means racing against girls a year older. The races will include 6-days of racing in the Netherlands, as well as events in France and Belgium. At home, she will compete in all the major road and time trial races across England, Scotland and Wales, that she has competed in during 2021. 2022 should see the introduction of Track racing too.

Abbey, who began racing when she was just seven years old, races for the Stonham Barns Park Team. During the first year of lockdown, Abbey was lucky enough to ride with European Champion, road and track cyclist for British Cycling and team CAMS Baso – Megan Barker- who has motivated her to aim for the very best results during this year’s racing season. Her aim for 2022 is for British Cycling to see that she has potential.

To date Abbey has notched up around 100 race wins, 40 second placements and 18 third places.

‘I do lots of preparation, probably more than others, making sure I race the best I can. It isn’t all cycling, where I only do 3 to 4 hours a week at the moment, I also do around 1000 sit-ups, planks and other core exercises every other day. I have to make sure I am fresh for the big races, so I have different types of training throughout the year to make sure I am at the peak of my fitness at the right times.’ My main races are not all in the same month during the year, so being ready for all of them isn’t possible, but I try to make up for readiness with the tactics I have learnt since I was very young. I am excited for 2022. You can’t always win, but you can try your best, which is what I will do for Stonham Barns Park and myself.

‘One day I would like to be a professional cyclist and my dream is to one day win the World Championship.  I know that dream is a very long way off, but I am happy to work hard each year. I also love encouraging more girls to ride and race. Other than the world championships, my long-term goal is to participate in the women’s Tour de France!’

Said Alan Forward, Owner at Stonham Barns Park, ‘We are so delighted for Abbey that she is continuing to smash all records in her road racing and time trials.  She continues to amaze us with her drive to succeed and professionalism and we are confident that she will be one of the young racers to watch in the years ahead.’

‘British Cycling has enjoyed huge success over the last decade and it is certainly still one of the most thrilling sports to watch.  We wish Abbey and the club continued success as they prepare for the season ahead.’

The Stonham Barns Park – SYRT is affiliated with British Cycling which has a calendar of races for the 2022 season starting in April. There are 27 members aged from 6-17 years in age.  Its vision is to produce accomplished riders, building skills, confidence, and safety on a bike.